The Power of Habit – A Really Powerful Book 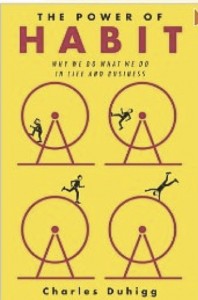 I didn’t read this book I consumed it. So many great case studies illustrating the power of habit.

How Habits Work – Charles Duhigg, a New York Times journalist explains precisely how habits work, why we need to aware of the signals, and how to change them to achieve improved performance, achieve sporting success, drive company turnarounds, sell coffee. The key ingredients to every habit: a cue, a routine and a reward. Every morning my cue at 6am is an alarm, my running gear is ready to go, my routine is a 6 mile run and my reward is a feeling of achievement, a low pulse rate and plenty of energy.

Once habits form they become habitual. You crave them. You can insert a different routine into the habit loop but once the loop is formed the process continues. The secret is inserting the best routine and creating change in your life.

Case Study 1 – Alcoa
Paul O’Neil was a bureaucrat, a creature of Washington, sharp, high achiever but not a turnaround guy. So when the packed Manhattan ballroom in 1987 crammed with shareholders, analysts and the press, awaited the new CEO of Alcoa, Paul O’Neil, there was a certain tension in the air.  Aluminum Company Of America (Alcoa) had made misstep after misstep and shareholders needed to hear a plan of action to articulate a better way forward. He opened his speech with,” I want to talk to you about worker safety. Every year, numerous Alcoa workers are injured so badly that they miss a day of work. Our safety record is better than the general American workforce, especially considering that our employees work with metals that are 1500 degrees and machines that can rip a man’s arm off. But it’s not good enough. I intend to make Alcoa the safest company in America. I intend to go for zero injuries”. You can imagine the confusion in the room! What he had delivered was the beginning of a Keystone Habit – a fundamental belief system that would transform the company. When Paul O’Neil retired in 2000, the market capitalization had grown during his reign by $27 Billion, the stock had risen to five times the 1987 level and the companies worker injury rate had fallen to one-twentieth the US average. He had disrupted the habits of an entire workforce around one thing. He knew it would create a chain reaction of good things, of good habits.

Case Study 2 – Fabreze
Fabreze gets bad smells out of fabrics was the tagline. Who wouldn’t want to achieve that? Sales were in the pan, going nowhere. As they dug deeper into the research they realized there was no habit being formed in households around Fabreze. Who wants to admit they have a smelly house? They needed to create a craving. As they studied many users of the product a breakthrough occurred. One lady swore by Fabreze. Show us how you use it the researchers pleaded. As she cleaned the house filled with the odours of her teenage boys, she finished her routine with a blast of Fabreze. “Spraying feels like a mini-celebration when I’m done with a room.” The researchers built on that, added even more perfume to emphasize the smell at the end of the process and developed a new marketing campaign around cleaning life’s smells. They had established a habit loop: cue, cleaning the house, routine, spraying Fabreze, reward, the Fabreze smell after cleaning. They had built a craving for that smell. Even when Fabreze ran out some households would spray perfume just to get that nice smell after cleaning.

It’s a great book well worth a read and maybe it will help you change some of your bad habits or allow you to inspire others to change their habits.