The Wall of Money & The Scaling Opportunity 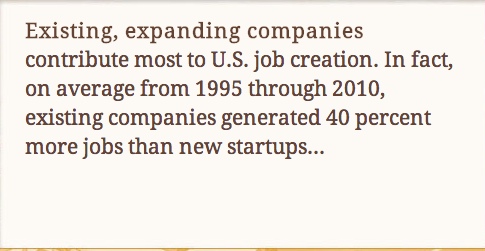 In 2012 the venture capital industry invested $26Bn in the US market, in 3698 firms at an average investment of $7m (NVCA). These were directed at start up companies. Approximately 40% of these firms will fail so it’s not an investment arena for the faint-hearted. Given only around 6000 companies sell out for $10m or more every year, it’s clear not many VCs will make much money. Equally at the big end of the market, Private Equity invested $313Bn last year in 1807 transactions investing on average $137m in each deal (PEGCC). Again the odds are tough to make money in the high end. You would need a lot of companies within the 1807 deals to sell out for $500m to $1Bn to get the PE players a decent return.

January 28, 2013, Washington, D.C. — The National Venture Capital Association (NVCA) today announced it has formed the NVCA Growth Equity Group, a sub-group comprised of those venture capitalists whose investment strategies center on growing later-stage companies. As the investment time horizon for venture backed companies has lengthened in the last decade, so too has the need for continued financing and guidance of these private companies prior to exiting the venture portfolio. Growth equity focuses on this final part of the venture investment life cycle, representing a critically important private alternative for the capital needs of emerging growth companies.

So the real opportunity for the wall of money is in a category of company that creates most of the US net jobs. Doug Tatum calls it the No Mans Land category. These companies as Doug puts it are too big to be small and too small to be big. They employ between 20 – 100 people and they are ripe for scaling! Here is a picture of the 120m people employed in the US by size of firm. I’ve highlighted in yellow this special category. There are 526,000 of them and they employ around 20m people. These are the job creators. 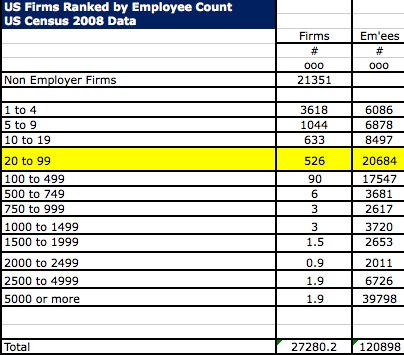 There is an unusually attractive opportunity to fund these special companies to help them scale into the 100 plus employee businesses and beyond. This is the engine for growth in our economy. This is the piece of unfilled potential that if grasped could fuel many more jobs, create wealth and establish some platform companies for the future. Moving through this size category. Really scaling these businesses through aggressive, controlled, aligned growth but safely is not easy but the rewards for entrepreneurs and their backers over the next 10 years are huge.
Some pointers on scaling are listed here.