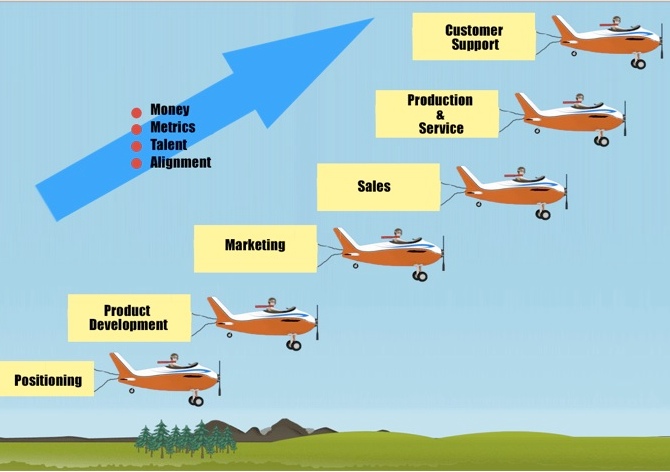 We are taught to be careful as we grow our businesses, although that mantra was certainly ignored by fully funded VC backed start-ups swinging for the fences until recently. In an interview with The Wall Street Journal in 2014, Gurley, the legendary Silicon Valley VC,  said the current environment reminded him of the tech bubble that formed in the late 1990s. “No one’s fearful, everyone’s greedy, and it will eventually end,” he said.

But most private companies don’t have $50m,100m or a $500m war chest to go fail fast. So many entrepreneurs look at scaling as a cautious journey, waiting patiently for sales to climb to a safe level before investing in the necessary resources, people, systems, facilities.

The problem with that type of thinking is that it assumes the world hasn’t changed much. But it has. Are you aware of the seismic changes that happened around 2007? Here is a summary from Thomas L. Friedman’s  new book, Thank You For Being Late:

The main obstacle to scaling today is not money, it’s not technology, it shouldn’t be the size of the market (unless it’s time to pivot out of your legacy market) and you can’t tell me there isn’t enough talent unless you’re looking for a 26 year old Glaswegian based in Boston with specific Python programming software skills!

No the barrier today to scaling is attitude, culture, alignment and staff engagement. The “can do” spirit starts at the top. And it starts with a credible big audacious goal that’s stretching but credible.

It starts with a “Why”. Why are you doing what you are doing? Apple and Google had a “Why” before they had a business plan!

Once you have a why, you can then graduate to a how and before long you are building products the market loves. (See last week’s post for my highlight of Simon Sinek’s thesis)

Culture’s not a verb. In a company, it’s a corollary of leadership actions where execution by every employee is aligned to a common cause. “What you do just proves what you believe”, Simon Sinek.

The good news for owner(s) of private companies or management teams of public companies – you get to choose. So scaling requires the appropriate mindset. That mindset comes from the top and as visions are translated to departmental and employee actions, you can see a culture being created. A culture where staff engagement is high (US average according to Gallup, 29%). A culture that will bring you success and that will drive your scaling plans.

Of course you need shareholders to be in agreement with your strategic goals and you need a world class execution plan that aligns everyone’s effort.

But then that’s where The Portfolio Partnership comes in to help!

Related post from 2013 – Why The Small Guy Can Win